I spent this past weekend at a comic convention, so this Nerdsay is going to be dedicated to a little con wrap up as well as an opportunity to mention some of the talented and nifty people I got to see.

My table tends to end up as what I like to refer to as the "Tower of Plush". I had some of the same selection I had at the 2011 HeroesCon, but I did add and update a few characters. You can see Harley Quinn tucked in on the left side, as well as the Ninja Turtles keeping watch. Both of these were very well received, so keep an eye out for them at future conventions and on my Etsy.

My neighbor was the lovely and talented Beck Seashole of Becka Doodles: The Art of Cute.﻿ We dubbed our tables the "Cute Corner". In addition to her webcomic about undead goodies, Sweeten Village, Beck also creates cards for the Topps Star Wars Galaxy series. You can purchase her adorable art here, which you should do because it is adorable and she is amazing.
I brought my Marceline as an example of the new doll pattern and had absolutely no intention of selling her until Tommy Lee Edwards' daughter came by. She looked so excited and had the perfect costume, how could I tell her no? At least I know Marceline went to a good home, and she can hang out the Ramona Flowers plush that was commissioned at Heroes. 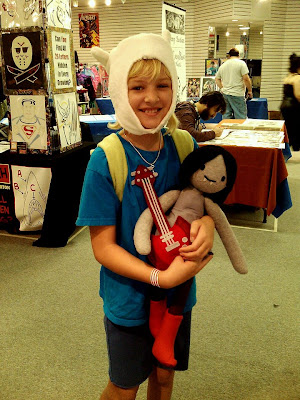 I also got a chance to talk to Steve Niles, who is a stupendously nice for a guy who writes about ghoulies ripping people's throats out. He's trying to raise money to cover his doggy's medical bills (read more about Sonny here) and is auctioning some great pieces by talented artists.

Now back to sewing...

Posted by Handmade Stuffs at 5:41 PM